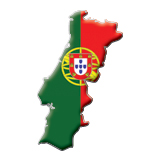 Portuguese is a Romance language. It is the official language of Portugal, Brazil, Mozambique, Angola, Cape Verde, Guinea-Bissau, and São Tomé and Príncipe.Portuguese has co-official status (alongside the indigenous language) in Macau in East Asia, East Timor in South East Asia and in Equatorial Guinea in Central Africa; Portuguese speakers are also found in Goa, Daman and Diu in India.

With approximately 210 to 215 million native speakers and 240 million total speakers, Portuguese is the 6th most spoken language in the world. According to UNESCO estimates, both Portuguese and Spanish are the fastest-growing European languages after English.

The Portuguese alphabet does not have a “k”, “w”, or “y”. These letters are only used in foreign words such as whiskey.